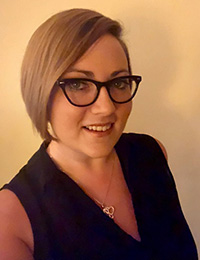 Hari’s musical journey began at an early age, singing almost as soon as she could talk and she also went on to learn to play piano and trumpet to a high level.

Hari trained in Musical Theatre and began directing choirs and arranging a cappella music whilst still in school. She then went on to direct a university choir whilst studying at Cardiff University, arranging many of the songs they sang.

Since leaving university Hari directed the Girl’s National Barbershop Youth Chorus for seven years, has been Assistant Musical Director for a national gold medal chorus as well leading and coaching choruses and quartets in singing and performance. She has continued to arrange music for groups in Europe and Harmony InSpires are very much enjoying singing one of her arrangements.

In 2011, Hari won the Ladies Association of British Barbershop Singers (LABBS) Gillian Depledge Lowe award for “Inspirational Leadership and Dedication” for her services to LABBS, the Education and Judging Committee and the National Youth Chorus. Then in 2012 Hari won the Pride of Buckinghamshire Young Person’s Award for “being and inspiration and for her dedication to music and youth in the UK”.

By day Hari works in Project Management, leading the Centre of Excellence for one of the UK’s household names businesses.

Hari took up her position in November after the chorus competed in the 2019 Ladies Association of British Barbershop Singers (LABBS) Convention at Llandudno. She has taken the chorus to success at the Oxford Music Festival where they were judged "Outstanding" in both classes entered.

Hari says
“I was absolutely thrilled and honoured to accept the role of Musical Director of Harmony Inspires back in October 2019. Having known and worked with the chorus a few times over the years I knew we would be a great fit for each other.
I am passionate about music and harmony singing and working with this enthusiastic, dedicated chorus, our journey together so far has been truly enjoyable and successful, and I look forward to our future and what we can achieve together”.